Omni Van is highly used in cinemas for the sole purpose, kidnapping.

I grew up watching movies wherein Kidnappers' one and the only vehicle is Omni van. On the roads, I've seen Omni vans used as school van, ambulances and a lot more but, somewhere in my mind, Kidnapping & Omni Van became the paired images at the early childhood.

Today, while hitchhiking, I encountered an Omni van at my sight, I was confused if I should ask for a ride or not. No logic or reasoning was working. The doubt was more reactive than of any thought. Within a few seconds, the van reached me, I put my hand up for the ride but I wasn't sure of taking this ride if given. I was skeptical of taking it.

Just before I put my hand down, the van stopped. There were two middle aged people carrying glass vases and a few paintings. He asked my destination and I said in a doubted tone.

They slid the door and there was no seat behind. They asked me if I'm okay to sit inside which included Frames, paintings, vases and a speaker.  I said yes, and I got in.
"Koi fikar math Karo, hum paise Nahi lethe."
Maybe my face expressions gave out the doubt. 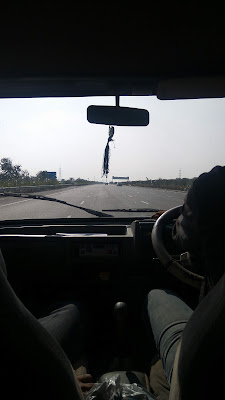 Soon after the word, I got onto the van and took the ride.

We traveled listening to Kishore Kumar melodies and three of us were enjoying the songs. We were humming, singing. And not a word was spoken during the ride except few appreciations,  "wah, Kya Gaana hai. "

I enjoyed the songs and also the ride.