Book- The Spy and the Traitor.

Bill gates never disappointed. A few years back, I read the book, ‘When breath becomes air by Paul Kalanithi’ following his suggestion on his website, I enjoyed it. The book has a special place on the shelf.

This year, one of his few suggestions, the Spy and the Traitor seemed interesting nonfiction that can be picked upon.

I read the prologue; I couldn’t put it down. I began reading the true account of the journey of a spy and a traitor narrated in a riveting way.

Story of two double agents, one called as a spy and the other as a traitor. To understand discrimination, I began the book. 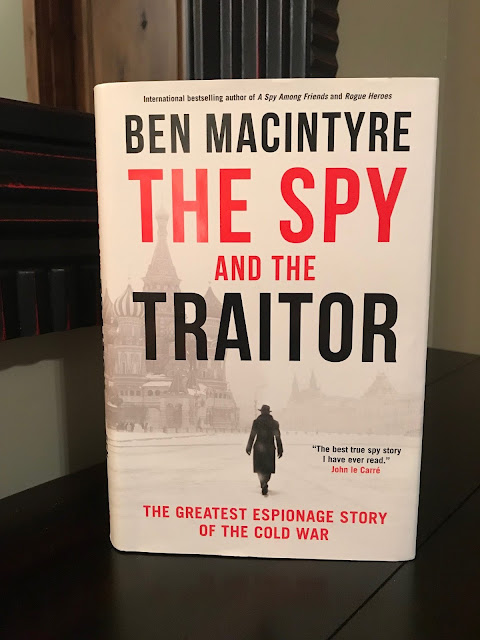 Oleg Gordievsky, born into a KGB family looked up to his father and loved his country as any other KGB family.  His brother and himself ended up working in KGB.

He began questioning his country’s dogma when he witnessed the Soviet union’s invasion of Czechoslovakia. “This brutal attack on innocent people made me hate my own country.” He never expressed it.

Posted in Denmark under diplomat cover, he got exposed to democratic freedom. He enjoyed the music, banned in USSR. He read the books, anti-soviet literature. He began to stray off from the ideologies he was born into. At the same, he wanted to progress in his work. He married another KGB official, Yelena. A cold marriage, just to increase the prospects of promotion.

Desk work. Dubious lives. The aversion towards his country was growing and the MI6, intelligence, Bromhead takes a year in checking on Oleg. Continuous meets at art exhibitions and at embassy parties, he finally, tries and approaches Oleg.

Fear of dangling and being exposed by the countries, they were cautious to make a move forward. Support from MI6, Bromhead, with a confidence, goes for a try and Oleg accepts the proposal. He’s turned, a double agent.

The game begins. Oleg crossed the sides.  That’s unbelievable to MI6 as well as Oleg. The stakes were high. And it’s interesting, how Oleg agreed with the MI6 offer and went ahead.

Oleg played smart stating 3 conditions, on which he’d work for MI6. He didn’t expect money, he didn’t want the conversations to be recorded, he wouldn’t give any of his colleagues’ details, and also want them safe.

Oleg began sharing the intelligence, that MI6 was trying hard enough to work on, but still, obscure the source. After Kim Philby’s case, the British want to stay alert. Also, it wants to maintain world peace.

Oleg’s contribution was immense, none like the other agents who worked behind the iron curtain, because, he shared the psychology of the KGB people rather than any technological or R&D details. He shared how KGB works, how do they think, what do they aspire for.

During the 1980s, Reagon’s Psychological Operations against USSR, military spending, and NATO war games were perceived as war preparation. USSR was ready for Nuclear war and was working to do the first strike. Oleg’s timely information to MI6, further to the CIA, has put off another possible Nuclear War.

Oleg's escape from Russia to the UK through Finnish border is an account that’s pacy, gripping and wouldn’t let you put the book away.

Got an idea of how the countries were aspiring to maintain peace in the world. Espionage is interesting tradecraft. To protect a system, we break certain laws. And those who break a few laws in the system, are punished. It all depends on which place, you stay in the system.

Back to the title, The Spy and the Traitor. Oleg is called Spy and Ames is called a traitor. Oleg worked on ideology. Ames was avaricious, as the writer mentions, “Gordievsky risked his life for a cause, Ames wanted a bigger car.”