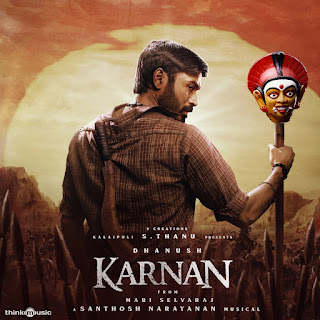 Youth in the village fight for their rights. Dhanush as Karnan confronts the oppression and the injustice he faces every time in the village. Set in 1990s, loosely based on Kodiyankulam caste violence, this movie depicts the nature of discrimination and the way the lives of the villagers are affected.

Dhanush as Karnan and his pal Yeman were at their best. Background score has elevated the drama in the movie. I liked the way, this movie shows the issues that mattered in villager's lives. Like, the bus issue. Village has been struggling to have it's own bus stop. Also, the message of the movie is not loud. At the end, we get to see what the fight is all about. Dramatic. Rajisha's role in the movie could've been made more strong rather than just a girl who falls over the hero for his actions.

- May 15, 2021
Email ThisBlogThis!Share to TwitterShare to FacebookShare to Pinterest
Labels: 2021 movies