Soon after I attended Vikram's workshop on object. I was kicked up to try out a few experiments that were done in the workshop. I shared the idea with Geetika. Impressed by the Geetika agreed to join the experiment. Both of us would be selecting an object for each other. We can write about the object, story based out of it, a piece or a poem. At first, selecting the objects for each other was a hectic task. Curious to know the stories behind a few artefacts, we picked those objects and asked each other to write.
No sooner we began, we shared about the objects as well as our lives. By the third or fourth task, we were reflecting on our lives through objects. Sometimes talking to objects and sometimes, talking about the object, we reflected our lives easily and in a comfort way. I tried many a times to consciously reflect through writing. This task paved a way to reflect in a better way.
I was given a picture to write on. I couldn't write anything except poem. In this way, we were becoming better at expressing ourselves. Geetika humanized most of her objects. She got a humor in her writing style. At first, she warmed up with few writings and later, she went on expressing in a better way. Cruising through past and wishing for better future, she wrote about the objects in a interesting way, revealing her life whenever needed.  Thanks Geetika for listening to the experiment and for agreeing to work along with me. 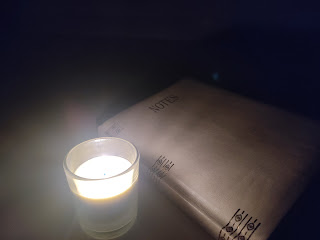 - May 13, 2021
Email ThisBlogThis!Share to TwitterShare to FacebookShare to Pinterest
Labels: experiments and experiences, Growth