Stories from Sirohi- The Love Story 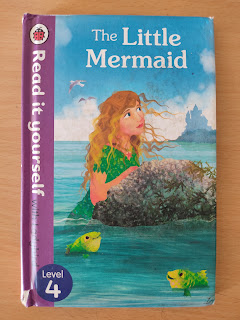 Class after class, Pallavi got tired and wanted to break. I'll read out this story, I volunteered and took this book, the Little Mermaid. It's a love story between a mermaid and a human. It's a beautiful story that a few twists and happy ending in the story. As I read the story, I enjoyed the poetic prose and discussed with children. Talking with tweens about love, they were shy to open up. Enjoying the cute love story, I prompted children to guess out and think of what  made little mermaid do what she did.

At first, we showed only pictures and asked them to guess the story. Later we narrated the story. Asking about their guesses of the story, we asked, "What you thought of mermaid and human?" "Friendship. We thought they were becoming friends."

After friendship, what happened? I asked the students curious to know how they'd come up with their conclusions.

"Dosthi. Uske baad Shaadi." they replied. It's interesting to see what children think of love at different ages.