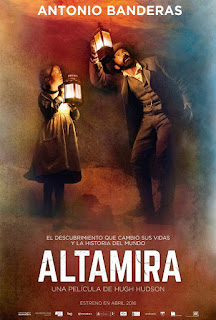 The movie is about the journey of finding Altamira caves.

I could relate how times were during Galileo's period. How church was so concerned and was against then science discoveries.

In movie, People  hover  between faith and science. I could only speculate but, not come to any conclusions.

Soon after the movie, I got to know that Altamira caves are for real. The story of the movie is not a fiction. The real hero who found the cave is  Marcelino Sanz de Sautuola
Golshiffteh Farahani acted so well. Looking forward to watch more of her movies.
- June 06, 2017
Email ThisBlogThis!Share to TwitterShare to FacebookShare to Pinterest
Labels: Movie