On a blue saturday, I decided to go for a run at KBR park. As the climate was cool, I headed to the park early  at evening.
As I jogged after a long time, I felt refreshed, rejuvenated and was determined to have strict routines regarding exercises.
Soon after the run, I strolled to reach my bike. An elderly person was sitting on footpath and asked me, "Suvitha hospital address maalum tereko."
I didn't know the address nevertheless, I had Google. I asked him to wait and searched in google, I couldn't find any. I asked him further details and he told LV Prasad hospital, petrol pump, Karnataka bank.
Listening to the vague address, I suggested him to call if he had any person at the location.  On listening to the other person on phone, he gave landmarks(TV9 office) and I decided to drop him there.
From KBR park, we started  on our bike to Nagarjuna circle and reached Karnataka bank and met Venkat reddy who was waiting there for us.
The hospital he had to go was, Suvitas hospital, Srinagar colony.
The elderly person whom I gave ride  is Narayan Reddy. He was around 65 years. His smile after reaching the place made me smile for a time. 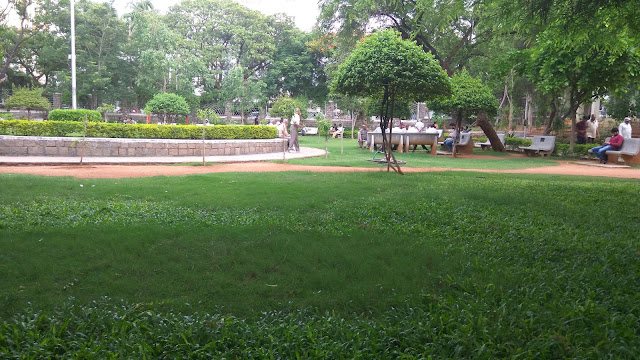 I was happy to help him. Run at KBR park lead to a ride with Narayan Reddy.


You never know where you'll go when you step out of your home.

- June 25, 2017
Email ThisBlogThis!Share to TwitterShare to FacebookShare to Pinterest