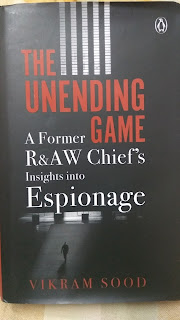 The Unending Game is a great attempt to explain to an average reader how espionage world would be. Vikram Sood was at his best explaining in the simplest way possible.

In reality, the world is not how a common man perceives.  It's beyond one's logical reasoning. Looking back into the history, we've evolved from autocratic to democratic governments. Rulers and ideologies have changed yet the power seem to be the same, the
lucrative trait which is the root cause of all this unending game.

Post world war, the big countries realized they're too dangerous to wage a war against each other in the battlefield, thus began a cold war attacking anywhere and everywhere but not through mere weapons. Welcome to the unending game.


Vikram started the book with the purpose of Intelligence in the world and defined all different kinds of intelligence.

Effective espionage has begun during the world wars and it's astonishing to read how spies outlived all the difficult circumstances and worked for their countries.

Adding artificial intelligence to all these bits of intelligence, the world is all chaos and the game picked up the speed that made it still more difficult and nerve cracking to analyze it.  Back in those days, sending an agent across the borders was a cumbersome and long task. Men with cameras attached to their body were sent first to check the geography of the location. That itself would take days but now thanks to Google Maps, the work became so easy for all the players. Technology always seemed to be the game changer.

Reading this book shattered the image of fancy spies i.e James Bond. The author shared how spies are depicted in close in stories and writing. John e Carre's espionage novels seemed to be close enough to the real spy world. It's not Daniel Craig who lives the spy life but George Smiley.  In the author's words, "James Bond is a fantasy. George Smiley is the reality."


He also shared how spies work and what kind of spies are there in this world helping their heads in gaining supremacy.  Talking about spies, Vikram mentioned,

"There are spies, and there are spies. He who performs invaluable work assigned to him, at great risk to himself in a hostile country and then retires gracefully to live a quiet normal life is the perfect spy"

Few to mention, George Koval, Kim Philby, and a lot more stories are jaw-dropping. I had a great time reading a few of the intelligence works by CIA on India.

Be it about Philip Knightley's surprise at the White House, ChandraSwami at California Apartment. These are the stories that drained away my wits for time.

Inside Intelligence
Talking about the surveillance, I believe this blog would be read by people to check if I'm inclined to any kind of stuff. Trust me, privacy is a myth. The latest Cambridge Analytica is enough to substantiate my statement. There's a lot of explanation of Edward Snowden course of action and all other surveillance activities done by big countries.


The most horrifying thing I read in this book about the internet is this passage.
"There were 1 billion Internet users in 2005, and by the end of 2016, the number had grown to 3.2 billion; 500 million tweets were sent on Twitter, Facebook had 1.7 billion accounts, and seven hours of footage in up to seventy-six languages was uploaded on YouTube each second. Sixty million messages a day were processed on WhatsApp and Facebook Messenger. An individual could spend several hours a day listening to the news, accessing YouTube, watching sport, listening to music, reading books, banking, transaction financial business, shopping at online retail sites, playing games, being in touch or just surfing the Internet. Ten years after it was launched in 2004, Facebook's 'Like' button was pressed 6 billion times each day and 350 million photographs were uploaded every day. Terrorists play in this field."

Eric Schmidt remarked, "If you have something that you don't want anybody to know, maybe you shouldn't be doing it in the first place.
Facebook, for instance, had as many as fifty odd privacy settings with 170 options some years ago. Facebook CEO Mark Zuckerberg had a similar comment when he said that, "Privacy is no longer the social norm." Yet, Zuckerberg himself is very possessive about his own privacy, having bought four surrounding houses to his property for $30 million in 2013. 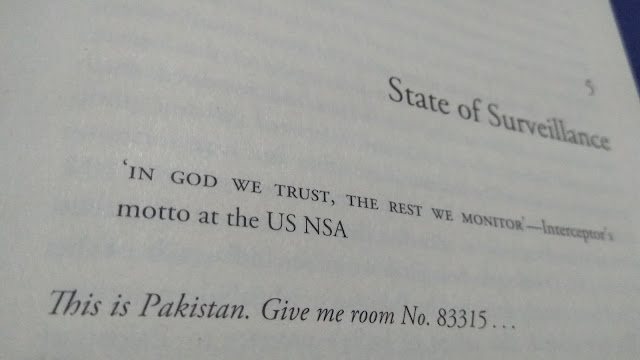 Explaining how this technology is used by both the terrorists and counter-terrorists,  the author mentioned the statement of the report by Dana Priest and William M.Arkin for the Washington Post.

The top-secret world the government created in response to the terrorist attacks of 11 September 2001 has become so large, so unwieldy and so secretive that no-one knows how much money it costs, how many people it employs, how many programmes exist within it or exactly how many agencies do the same work.'


The author also mentioned the future course of the espionage and how terrorist and counter-terrorist together are spoiling the world. Talking about the weapons,

"If weapons are the muscles, foot soldiers the limbs and ideology the mind, the money is the heart of any terrorist organization. "In author words, "Today, like economic globalization, terrorism is also globalized with money as the engine and in most cases, Islamic radicalism is the fuel. "

Watching movies, Mission Impossible, Raazi, The Imitation Game, I was never sure of the intelligence work in the real world. Reading this book made my jaws drop. It pushed me to do some research work on this. It was a page-turner as well as curious to know how things work.


The future seems frightening reading the way terrorism is globalized. Technology is being used even before counter terrorists use.

Vikram described how terrorists work and how professional they're parallel to their counterparts.

The Future: What lies ahead
Vikram Sood mentions how future wars would be. He emphasized that water would be the cause of all the wars. Looking around, I firmly see the signs of such incidents. And talking about Indian Intelligence, he worries how heads with no knowledge are making it ineffective.

It's clear that people who have no clue of the Intelligence agency administration ends up acquiring power and ruin the whole game with their ineffective actions. The Author writes,

"It is a travesty of our system that an individual who spends his entire career being a generalist and floating from one short-term experience to another suddenly acquires the power to decide the fate of specialized agencies about which he has little idea."

It's truly an unending game which plays with their own rules and as the author said, "Never is enough going to be enough"  Indeed it's a real unending game.

Thanks a lot, Vikram Sood for writing this. Informative, gripping and a must read for all who want to know espionage.
- September 29, 2018
Email ThisBlogThis!Share to TwitterShare to FacebookShare to Pinterest
Labels: Books