Chiku and Ankita discovered the Desk Work Book, used to design mock tests for their practice. At the end of the term, I wanted them to get habituated to the pattern. I assumed, they're not familiar with these kinda workbooks. I was wrong. They're over-familiar with it. They rely on these workbooks only.

Chiku got all workbooks except English. Other teachers have suggested them to get one. No one asked them in English. These kids are punctual and honest about their studies. Discussing with them, I realized that they want to study but, they cannot visualize themselves studying beyond the 10th. 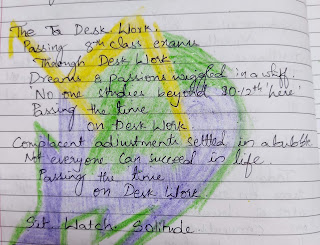