I glanced at an excerpt on how people strived to live under the poverty line to understand what it means to be under poverty line. Story seemed so intriguing that I decided to buy the book and read other stories.

This book comprises of stories of people who struggled in life to get what they meant ‘freedom’ in life through hope and courage. There are few stories which kept flashing in my mind.  There’s one story which got engraved on my mind. The story of Rajamane who got into jail for no reason and went back to jail by the choice. He reminds me of quote, “You scream, you cry but, do not ever give up!”In midst of terrible conditions, he decided to gain his freedom and fought for it.


Rajmane’s story in brief.Rajmane is a poor shopkeeper who got accused of murder which he never did. There's one person  who ran a illegal liquor business and got murdered.  Rajmane was in debt to this person and he was taken into prison accusing, he killed to avoid the burden of loans.”Rajmane couldn’t understand what was happening. He neither had knowledge of what was happening nor knowledge of getting out of the accusations. By lack of money, he couldn’t afford a legal aid. Though he had a lawyer, it was of no help. Besides the failure of acquitting at court, he got sentenced for 20 years.


Suffered at the start but, he never gave up. Listening to the advice of senior prisoner, “You take your case into your own hands. Jail is the best law college.”
He pleaded for the books and started learning about the law. After a lot of efforts, he could get few books on law and tried learning as much as possible. After being able to understand ynder what he was booked,  he wrote 20 page appeal to High Court. He was discouraged, mocked, that his appeal won’t even be considered. Not only High court accepted the appeal, they provided a lawyer and also the lawyer was very much impressed with Rajmane’s appeal. Meanwhile he started helping other prisoners, he reached a point where even Jailors reached him for the help of few appeals. He made peace with his work at Jail.As he pleaded at High Court, he got acquitted in less time since he never committed the crime. But still he had to spend 5 years in jail for no mistake which he committed. He cried on the day of release realising the sense of loss.


Meanwhile, he decided that he could help the downtrodden in the jail. He realised it was impoverished crowd who ended up at jail not the rich. He wanted to help as many people as possible. And thus he returned to jail not as prisoner but by choice to help the prisoners.Contemplating on, “What if situation?,” I wonder what would be his life if only he hadn't entered the prison.  Everything happened for a reason and he is doing a great service to the people who are in need.
This story touched me a lot. His optimism intrigued me. There are so many stories indeed in this book which are inspiring. It’s a collection of stories of hope and courage. 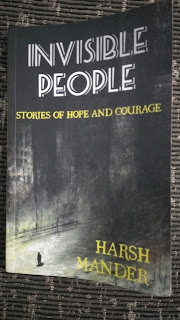