The Last Lecture by Randy Pausch.

I'm grateful to have good teachers in my life. During my graduation days, one of the Department which was close to me was Chemistry Department  even though I only had that subject for one semester.


I could walk into the department at any time and blabber out what all I want and still they'd be there to listen and share what little they know about the talk which we share.

Jyotsna Mam, my Chemistry Professor suggested me this book while we were having one long conversation about everything that comes under the Sun.


The Last Lecture by Randy Pausch.

I was given a brief introduction on him. In Carnegie Mellon University they had the series called "The Last Lecture Series,"in which the professor considering their demise would ruminate about what matters most to them.

So, this person being a Cancer Patient, will give his last lecture in his life about what matters most to him.

Dying man?  All the humanity within gets kicked to pity!

I learnt not to pity hearing few good words which I'll share in my next blog post.

I wanted to know more about him.

And there I was with this book in my hand. 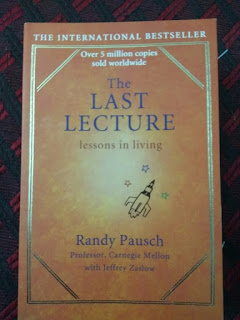 All he could give was a lecture as he says, " I was trying to put my self in a bottle that would one day wash up on the beach of my children. If I were a painter, I would have painted for them. But I'm a lecturer, so I lectured. "

He takes you along to show the elephant in the room which is about, reveal what's in there.

I quote his lines,

"We cannot change the cards we are dealt, just how we play the hand."

He had some bad cards but he dealt with so much of  wit and wisdom. And he describes about all his childhood dreams which he almost made them real. Even though he did not accomplish his one dream, joining in the NFL, he got more in pursuing it.

He cherishes and feel grateful for his parents for allowing him to dream big.

He talks about the failure, "Experience is what you get when you didn't get what you wanted."

There are many lessons to learn and the most important lesson I was awed at was, 'Brick walls are there for a reason. They give us a chance to show how badly we want something.' He terms the problems and obstacles in the life as 'Brick Walls.'

Also, there are few tips to all the young men and women for their life when Randy listens to his friend who says,

"When it comes to men who are romantically interested in you, it's really simple. Just ignore everything they say and only pay attention to what they do."

In his lecture, he doesn't rue about cancer or talk about his family as he'd get emotional but, he wrote about his family in the book. He describes how he loved his family. How he became a man who  planned out very well before his desmise.

I loved the book. It's a very easy read. But, sometimes you stop reading and take a breath to pay respect to him for the life he lived. Great optimism and he is the hero.

I'd suggest to read the book rather than watching his 'Last Lecture.'
- August 25, 2016
Email ThisBlogThis!Share to TwitterShare to FacebookShare to Pinterest