Tiger by Kate Brittlebank. The life of Tipu Sultan 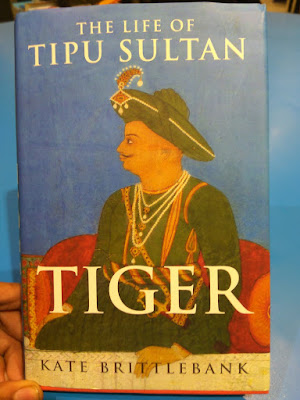 If you're not a history buff, you may not like this book.  But, If you are! then you'll definitely have a good time reading this book. 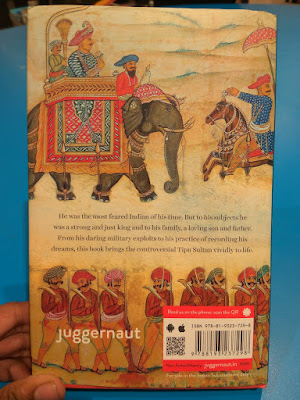 This book will take you back to Pre-Raj India.
India, where few rulers fought with British against their rivals and few of them against British. It's about the Tiger of Mysore' Tipu Sultan.

Things you'll get a glance about.

Tipu Sultan was the bravest and a feared one to British. So cherishable was his death to Britain, that the looting of his kingdom was an opening scene of Wilkie Collins novel, 'Moon stone.'

Painters, writers, and artists celebrated the siege and looting.

The author takes  you into the time when Haider Ali, father of Tipu Sultan was struggling to keep up with British. He fought and lost the war. Tipu Sultan was prisoned at young age.

Before he enjoyed the privileges of prince, he also experienced the imprisonment.Those childhood memories would have definitely etched on Tipu's mind which the author didn't describe it in detail.

Cool fact about Tipu Sultan. He is a Tech freak. His father made sure that he  was educated under good teachers. He was well educated. His knowledge on varied subjects was cited in the book.

He used to import gadgets of his time(Microscope, barometer, thermometer.) And not to forget, he was the pioneer in the field of rocketry warfare in India.

Looking Tipu Sultan as a ruler, a baseless perception  prevailed among the Indians, that he is a bigot.  This was shattered when I read few anecdotes.

He knew about religious harmony and also the vulnerability that religion could bring in common people. He didn't demolish other sacred sites without a purpose.( He only demolished the sites that stood as symbol depicting rivals in different forms.)

Like all the rulers, he was renown to accept diversity.

When he had tought fight with the British he inculcated Jihad slogans bringing back the old rival tales- Crusades. Funny thing is, he  also had a knowledge on futility of fights over religions. I infer this from his lines (to his people in Peshwa kingdom).

"Let the fire of discord, therefore, be kindled amongst them, to the end that they may, in this manner, waste(their strength upon) each other.

He had an interesting habit of writing down his dreams(even I do that :p). I write in my journal and his journal was named as "Khwab-nama."

The best part of the book is when author describes Tipu Sultan not as king or fighter but as a father and a son.

She  describes Tipu Sultan as good muslim and support her statements by these beautiful lines,

"Personal faith is not something that one can't measure with any accuracy. The only test for genuine piety is to judge a person by their actions."

Of all, I love this part. His obsession with the Tiger Imagery. He never revealed to which audience the tiger Imagery was an answer but British took it as their counter part because, lion was Britisher's symbol. 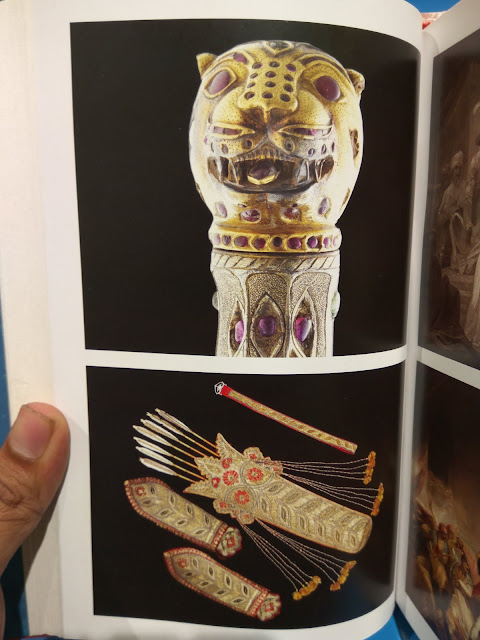 The beautiful ferocious Babri. At present, many museums in london hold the priceless, precious looted pieces of Tipu Sultan.

Besides all the wars, I find this one funny, Anglo Indian war-4. The time when media kindled the war.

When Tipu was in huge debt to British and when his two of his sons were taken as prisoners, he held a secret mission. Trusting a dubious origin french adventurer, he sent that adventurer to Maurtius to seek for an army. The Mauritius king put up a public notice recruiting army for Tipu. Bengal paper published it. And the rest is history. British invaded and Tipu Sultan was killed on May 4 1799.

This book gives you an over view of the grand life, Tipu Sultan had lead. Unfortunately, it's a very short one, after reading this, you'll be in search of more books about Tipu Sultan.

I should acknowledge the strenuous work author put in to this project.Author of this book has done a commendable work. Hail historian!

Take a bow Kate Brittlebank. It's an easy read and impulses you to know more about Tipu Sultan.