In the month of August, I thought to take a long train journeys in India. Though, I planned and I never executed them to the full. Thanks to Azhar's birthday, I impulsively got on a train on a sunny afternoon and began my journey.

As soon as I got onto the train, I found five boys accompanied with an energetic uncle occupying my berth. "We'll get  down, can you please sit here." he requested in Hindi. I obliged his request and continued to sit near by. "Kya yaaro, itna tandh thi Delhi mei," the boy at the window exclaimed about about the winters in North India. I could get those Hyderabadi vibes.

"Ajmer." the uncle replied. "Hyderabad se hai kya?" I asked immediately. They nodded their heads in silence. "I'm also from Hyderabad." I carried the conversation forward.

The questions were darted continuously from the elder person. "Accha kaha rahte?" "Chikkadpally mei rehte the?" "Ammi papa Kaha hain?" And the conversation went on. We broke the ice and the energetic uncle introduced his gang. He's traveling to Ajmer URS along with his sons and other nephews. 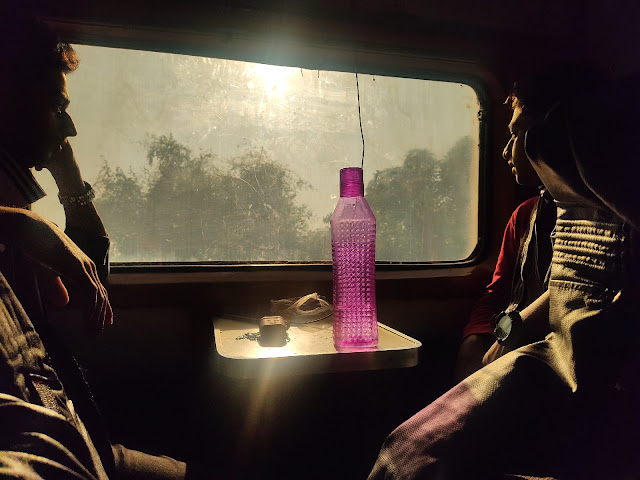 All the boys began to taunt the youngest by how he acted at Delhi Railway Station on a wintery morning.
As the boys got out of train at Delhi railway station, they were feeling too cold to step out. The boys weren't prepared for this cold. A few in slippers, a few in tee-shirts were strolling in the AC coach. Before they could unpack their bags and wear winter clothes, the train got stopped and they had to get down. They got down and wore all the possible winter wear. The youngest of all, who couldn't bear the cold wanted to reach the hotel as soon as possible. In a mix of words, he went and demanded the auto driver"Afzalganj jaana hai baap."
"Arre tairo. Hazrath Nizammuddin ke paas jaana hai." Jaldi chalo yaar, the boy was throwing his tantrums. Listening to the whole mess, "Kaha jaana hai  batao bhai?" the auto man asked furiously.
"Jaao yaaro. Hazrath Nizammudin, the uncle pleaded taking five of his boys."
Looks like the Delhi cold has shaken the youngest lad brains.

Spending a few hours with them and watching the Rajasthan from the AC coach, they were expecting  to see some desert in between.

After them came Mehboob at Ajmer station, who is going to his home Rajkot. He's fun. Soon after some time, he finds me near the wash basin and offers me a cigarette.  'Nahi peethe ho?' he was curious and wanted to offer one. As I rejected his offer, another person came in and was afraid to pick one and shared his concern, "What if TT comes and asks for fine?" "Paise nahi hai! Keval Beedi hai boldo," the Rajkot lad assured another guy and shared the cigarette.

When he had cigarette, why did he mention, 'keval Beedi hai' is still an unanswered question.

As I began to munch on some biscuits, he offered me Paan this time. "Nah" I replied. 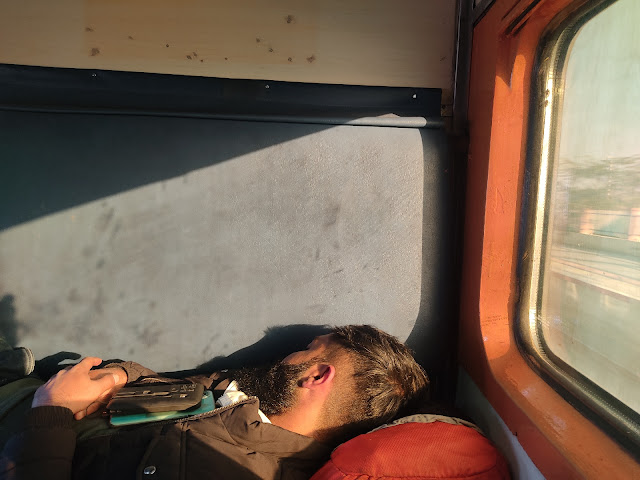 Kuch bhi nahi lethe ho? He was surprised again, he continued having paan without a company. While the sun rays hit the berth, he managed to get some sleep. Sometimes on phone. sometimes he was silent staring at he opposite empty berth.

I was on my laptop working, writing, listening to songs. and staring at the scenery watching Beawar rocks. Got reminded of Satvir's words about these rocks.

As the sun has set, I watched the plain fields under the natural light and enjoyed standing at the door rather than in the coach. In no time, I arrived at my destination and got down.

From now, I'll try to plan for the day light train journeys. It's fun.