Rescue Dawn is based on a true story. U.S Air Ranger Dieter Dengler goes on a classified operation to attack Laos. His first operation he heads to.


He enters into the radar, drops a missile and gets attacked in return. He refuses to eject and crashes with plane. 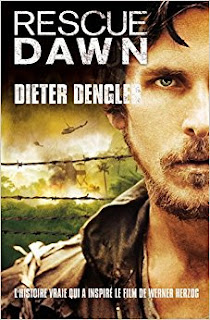 He gets surrounded by locals and becomes POW. His story reminds me of several true stories of Eric Lomax, Jim Stockdale and many others.


For more than 2 years, they lived in a prison. One doesn’t believe in anything but, their release. Another always shits in his own pants and others are deprived of meagre food.  Deuter plans escaping out from the day one. They grow weak day by day.
With meticulous planning, they escape with teamwork and finally gets rescued by team. He loses his only friend and hallucinates being with him.


Movie is neither heart wrenching nor simple to me. The hardships they went through is utterly ineffable.“Klaus Badelt, Ernst Reijseger” made a great contribution to this movie through their music.
Being conscious about sound, I could acknowledge the simple sounds, be it rustling of leaves, waterfall, sound of breeze.Kudos to the director  who depicted drama in a subtle way rather than making it all gory. I loved the Dieter passing on lines to the boys, " Empty what is full, Fill what is  empty!" Inspiring.
- November 02, 2017
Email ThisBlogThis!Share to TwitterShare to FacebookShare to Pinterest
Labels: Movie