Factfulness is one of the most educational books I read after a long time.
Starting with the fact-based quiz, the author challenged to take the quiz and showed where we stand on our world view. This book is a must-read to know how we commit mistakes in knowing our world.

If we are not informed rightly about the world we live in, we tend to make decisions based on the distorted knowledge we have about the world. The author mentions about the general instincts we rely on, that distorts our world view. He provided a world view with the help of facts that are totally different to what we feel rather than think.

The author also gave a few tools to view the world so that we do not rely on our instincts which deceive us to see the progress of the world.

The Gap Instinct.
Shattering the stereotypical terms like developed countries and developing countries, Hans, the author termed the countries in four income levels. Level1, Level2, Level3, Level4. Levels created based on the income of the countries.

Explaining the world through income levels, Hans also cautioned about the average and the illusion it creates.

The Negativity Instinct
There are a few times we get to see the worst through our unreliable, distorted lens of the world and tend to believe that the world is becoming worst. Hans mentioned how there’s immense progress in various countries through data. Using Statistics as therapy, Hans showed all the improvements in the world and why we should celebrate the growth.

Acknowledging the bad situations that are present, Hans reminds the readers to compare the situation and see the better side of it. ‘Things are both bad and better,’ says Hans showing the reality but also displaying that things are getting better.

Whenever someone says, things are getting better, we tend to hear the message as, ‘Don’t worry relax,’ but, the author mentions how things can be both bad and better.

The Straight Line Instinct
I caught myself misinterpreting a lot about this world while I was reading this chapter. This chapter also deals with a mega misconception of how the population is increasing and increasing. In fact, the world population is not increasing like a straight line in the graph. It has its own balance.

The author showed the ‘bad and better’ picture of population control. In previous generations, the infant mortality rate was high and the fertility rate was high. There was a control in the population overall but, thanks to a lot of improvements in the world, there was an out of balance situation in the past (the 1900s) and now we got the new balance with low infant mortality rate and controlled fertility rate.

Falling away from extreme poverty, sex education, freedom of choice to girls through their education seemed to be the keys to control the population curve.

Without much thought or fact check, we tend to create an opinion on population, thanks to the media who continuously show the news that’s worse than what’s good in the world. Author mentions, how media does not do it with bad intentions but work through instinctive mind-set.

This chapter challenges everyone through data and it’s interesting to how a lot of socio factors influence the other factors.

The Fear Instinct.
We do not work effectively in fear. Period. There are a lot of anecdotes and data on how fear worsens our work rather than make it better. There are also stories author mentioned how fear worked in searching for solutions. ‘Fear’ helped organizations to be meticulous in their operations at times. In contrast, there are stories on chemophobia that don’t allow us to make decisions through data-driven arguments.

The size instinct is explained ‘80/20,’ Pareto principle that explains where we need to focus on, to solve the world problems. The classic example to talk about this instinct is the accusation on India for polluting the world by Level 4 countries.

To work on the Generalization instinct, the author talked about the dollar street project, a project that displays the differences within the groups and differences across the groups based on the income levels. Interesting project.

Every chapter has a set of tools that helps us to be more factual rather than instinctive in looking at the situations. That makes this book to take its permanent place in the bookshelf for quick references, if we are panicked of any world problem that’s shown to us.

The Destiny Instinct seemed to apply in the place I work in. Many teachers I knew, trying to decide and teach the children assuming their destiny is fixed. With such instincts on the stake holder’s destiny, they do not try the alternatives to work. We are no good. We tend to decide that ‘govt teachers are destined to relax’ and do not try to find the alternatives in the work.

The author mentioned and explained this instinct by how wealthy powerful banker relies on destiny instinct and decides that Africa is always an underdeveloped country. This instinct deprives them of tapping the great potential.

Talking about How to Control the Destiny Instinct, the author stated, “How can we help our brains to see that rocks move; that the way things are now is neither how they have always been nor how they are always meant to be?” Thought-provoking!
Another tool to come over the destiny instinct is to update our knowledge and know our past and collect the examples of cultural change. 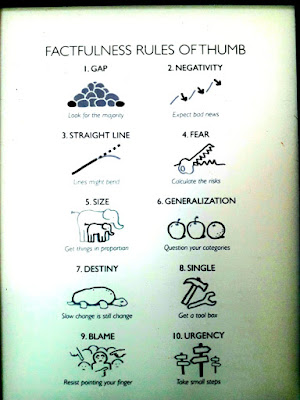 The Single Perspective Instinct
When we all got is a hammer, everything looks like nails in the world. ‘There’s no single solution,’ says the author challenging many ideas. A single perspective can limit our imagination.

The Blame Instinct
Reading the refugee story was eye-opening how the system seemed to be a villain rather than any single authority.  Blaming an individual for the problem would never help us to think about the solution. Praising an individual for the solution would also not help us to look at the system behind the success. Reflecting on systems would make a difference.

The Urgency Instinct.
‘Now or never’ is the situation we are put into often. It’s true about climate change though but, we need to pull up our socks and be attentive while we are trying to solve the problem. Being in the rapidly changing world, one way to not get panicked through this instinct is to insist on the data and look out for the problem. Data that’s relevant and accurate but not the other way.
This book is a lifesaver to stay away from worrying about the world unnecessarily. This attitude does not make the problems vanish but, the tools mentioned in the book help us to look at the problem in different ways and decide for our own good.