'OPEN' by Andre Agassi and J.R.Moehringer 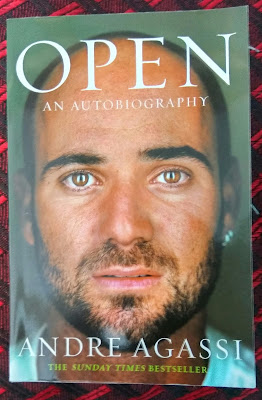 Trust me, I never knew Andre Agassi till I picked up this book. Not even once in my life, I heard about Andre when I was around my friends talking about tennis. (Blame my tennis friends.)

My good friend (Not from my tennis friend's circle :p) suggested me this autobiography when asked for few  book suggestions. I read the blurb. I got to know he is one of the legends in Tennis sport.  I was surprised when I read, 'Agassi hated the game since childhood.' This line intrigued me to find more about him. And I bought the book.


Before I talk about Andre's life, I should mention about the ghost writer, J.R.Moehringer. He did the work outstandingly. Every thought is crafted into a beautifully written piece. Andre covered everything in his life I guess. The pace with which the author takes you in this ride is overwhelming. He makes you laugh when Andre laughs. He makes you empathise when Andre stumbles in life. He makes you feel joyful when Andre enjoys. Great work, J.R.Moehringer!

The first chapter of the book is named as, 'THE END.'  That's my chapter name in my first novel'In between the bridge'. Interesting!!

Immediately, a smile shone on my face. No sooner I started reading, I was taken  back to his final game. The start was so dramatic with the description of his state of mind. I could immediately connect to it through his words. The description was filled with feelings, thoughts, and introspection.

Characters were introduced in the nick of the time for, Gil was the one, I found interesting. Everything was at a slow pace  until he entered the court to play his last game. Andre enters the game and as the ball paces up in the court, so is the writing.

Severe contradictions were running in my mind, judging his father while Agassi was struggling, playing against Dragon, which was built by his father, a ball machine.

Who on the earth would force a kid and scares him to the death, ordering him to play tennis all the day?

Mike Agassi does. Andre's father. Before we come up with judgements for his behaviour, we were given a perspective of why Mike forces him. Because Mike knows nothing, except tennis.  Andre's childhood was taken away by his ambitious father, Mike Agassi.

Having a rough childhood, tennis filled up his whole teen life. He used to hit the roads with his brother playing tournaments. It was only his brother, Philly and friend Perry who solaced Andre with conversations.

Andre grew up and wanted to know who he was.

He wanted to identify himself. And in the process of identifying himself, he took few paths and left few paths (He's a school dropout.) he was totally bruised by the media misinterpreting him all the time. Media never bothered to know Andre's intentions. They named him as punk, rebel, careless celebrity. We could witness the confusion, sadness of Andre's when he was cornered by the world misinterpreting him. Andre's introspection was beautifully depicted in the book.

In the course of pursuing his hated work, tennis, he made a team, a beautiful team which stood up with him all the time.  Trust me! Having the best team to support you through rough and tought times is something which all look for. (I have my best basketball team. I know the feeling ;) )


Few conversations were jotted down in my journal, just to keep rereading them. One of the conversation  with his close friend J.P was about his identity.

These lines tell us how he struggled to put up with the world. Fans on one side, media on the other side and himself being a stranger to himself."

His introspection taught me a lot.

Be it about life, or fame or game, those were thought provoking and left me relating few incidents in my life. It was not an easy life. He struggled hard swayed by confusion on his identity.
Mean while he talks about the women he loved.

I can't resist myself, appreciating J.R.Moehringer again for  making the writing so compelling and heart touching. His dull relationship with Brooke Shields was limpidly put on the book. And also, nothing made me laugh as I laughed reading Andre's first futile attempts to date Stephie Graph. I could read in between the lines to know his fervor love on Stephie Graph.

I have a lot to say about this book, few are his experiences with Mandela, Gil, his coach, his drug  usage, his discovery of value of education. I'd go all day describing each and everything but I'll better wind it up stating his school unofficial motto. BELIEVE.

It was not an easy ride for Andre  travelling with his fellows in life. He lived, he laughed, he loved and he believed.

A memoir which should be read by all!! God bless my friend Carolyn for suggesting me, "Andre Agassi," Thanks Carolyn! Kudos Agassi!

To buy this book, check out

- October 10, 2016
Email ThisBlogThis!Share to TwitterShare to FacebookShare to Pinterest

After a long time, I rode to office on cycle during hot summers. Listening to Ali Sethi's Chaandni Raat, I cycled through the streets o...