SummerHill is a the school set up by A.S.Neil in 1921. This is a progressive Education school where there is no force on kids to sit in classes. They're free either to study or play. They believe in child play. In the age of the schools where there's seldom given a thought of all-round education, this school back in the 1920s made children's freedom the main objective. It's surprising to see such a radical approach being started during those years.

Summerhill believes in freedom. Author Neil emphasizes how we as adults should not demand the children to be just like how we want them to be. Children have to grow on their own.  Such freedom gives the child to be self-regulatory and makes his life.

'No classes, No focus on studying subjects. What do they become in life asks many.'

As there's no force on what to learn and what to practice, many kids in the school learn by their own interest. There'd be kids of age 18 who walk out of the school with basic literacy. But, still, they make a good life.

Neil in his words, says, "Creators learn what they want to learn in order to have the tools that their originality and genius demand."

By the way, Summerhill emphasizes about the kids who lived in the free environment from early childhood. It's unwise to expect a teen to attend the school and get changed immediately. 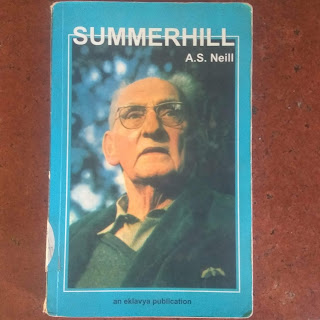 How Summerhill is different from main schools?

Summerhill wants kids to be happy in life. They need to contend in their life. They do not force any kid to attend the classes, they leave it out to the children. If they do not want to read, they'll not read. When given such freedom. Neil talks about many kids who are good in their lives. They may not be rich, engineers, doctors but they're doing what they love.

"If a child is free to approve of himself, he will not usually be hateful."

Many may assume, that freedom is of no rules. Of course, there are rules made by children. They function in a democratic way.  They have a General Body Meeting where they discuss the issues and vote it out. One student chairs the meeting and he selects the next chairing person for the next meeting.

Children need to be happy. Indeed everyone in this world ought to. Is it not for happiness that we strive for? They may become a carpenter, engineer, singer, musician. Whatever they decide to become, they'll be happy rather than doing what they don't love and spending a hateful life.

Neil also mentions how he sees success. "Success is the ability to work joyfully and to live positively."

The free Child. Letting the child to be himself outlives his various self-interests and regulates himself by his adulthood.

To teach children the moral values is something that comes out of fear and jealousy.  "The art of dealing with the children can be defined as knowing what not to say," says Neil.  As adults, we tend to preach and teach kids all sorts of values that we acquired. We always try to rub in our prejudices, notions, values jealousy rather than letting the child creating his own.

Listening to this, many misinterpret freedom. "Freedom is tough," says Neil.  It's not easy to give freedom.

Giving out everything that children ask is not freedom. Neil cracks between how his school functions and how he deals with different kinds of kids in this book.

Many kids come to his school with various issues. Neil tries to analyze and solve their inhibitions, hatred.

Most of the content in the books seems relative to me.

Ranging from Obedience to Religion, Neil discussed a lot in this book. It's quite an interesting read.

It'd be unwise to strictly take few things granted by reading the book as it's for every book. Highly recommended yet suggested to be more reflective during the reading as, one would get shocked to read various strong analysis be it on adults or the children.

To this year, also the Summerhill functions headed by Neil's daughter Zoe. The prerequisite to seeking admission to this school is that parents need to read Summerhill and discuss it with the principal. Quite an interesting read.